MFD.org helps active duty military members, armed forces veterans, and military families find the financial resources they need. We can help you find the charities, lenders, and financial institutions to help you.

Whether you need to pay the bills, relocate, consolidate your debts, buy a house, or purchase a vehicle, MFD.org will point you to the right place. Browse our categories on the Military Financial Directory.

How do I find my status?

Financial services can vary widely depending on what your current military status is. Active duty military members typically live on base and carry out day-to-day duties as a member of the armed forces.

If you are unsure of your current status, you can look at your LES (6th box) and see your Expiration Term of Service (ETS) or Expiration of Active Obligated Service (EAOS). If you are still unsure, you can ask your commanding officer to clarify. For more information, please see our page on checking current active duty status.

If you are reservist, veteran, or a military family member, you may instead qualify for other financial services not relating to active duty financial programs. 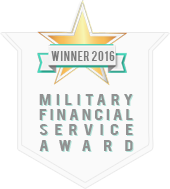 MFD members nominate institutions they believe are committed to preserving and protecting military lending standards and practices. The eligibility period for the 2016 Military Financial Service Award was January 1st, 2015 to December 31st, 2015. Winners are announced in January of the following year.

The 2016 Military Financial Service Award winners are MilitaryFinancial.com and VAFinancial.com.

Both of these outstanding military lending companies have provided top quality financial services and information to military members, including veterans, reservists, spouses and their dependents, and active duty soldiers. Congratulations to MilitaryFinancial.com and VAFinancial.com for winning the 2016 Military Financial Service Award. Continue your five star service!